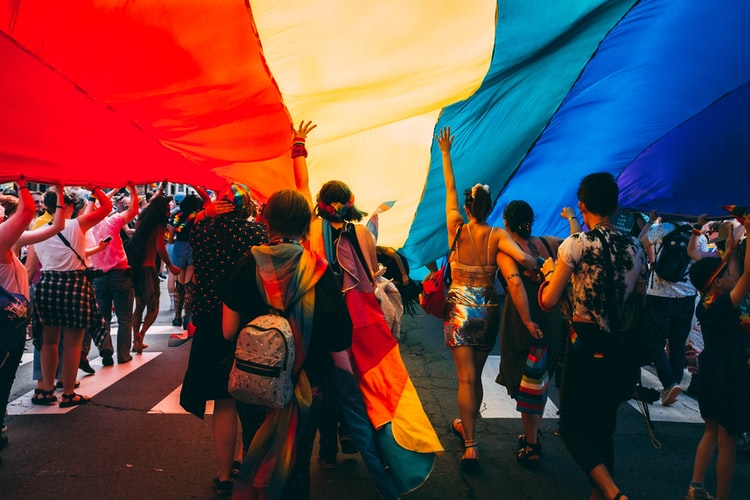 How to be a Good Ally, All Year Round

Pride Month is a joyful period of celebration and gives people the opportunity to be their true, authentic selves. It’s also a chance to learn some history and, in particular, how to be a good ally to the LGBTQ+ community all year round.

The history of Pride doesn’t have such celebratory roots; it actually commemorates the Stonewall Riots on June 28th 1969 in New York. After relentless persecution, the LGBTQ+ community erupted into a spontaneous protest after a bar raid by the police. The following year the first Pride march took place, with other cities joining every year. Although we have come a long way from June 28th 1969, true equality is still a distance away and allies play a huge role in carving out that path. So here are a few ways to make sure you continue to support LGBTQ+ people from July 1st and beyond.

Use your privilege to make space for LGBTQ+ voices

Generally speaking, the UK doesn’t feel like a safe place to many LGBTQ+ people right now. A recent Galop report stated that 9 in 10 LGBT people have received some form of verbal abuse. Equal rights for LGBT is often discussed in the news; however, very few publications actually include queer voices in the debate. This can be partly explained by the lack of representation in the media, but fear is also a factor. For cisgender, hetrosexual people, talking about important issues in a public forum may result in a heated argument. For minority groups that risk can escalate to endangering your livelihood or even your personal safety. It was found in a government survey that two-thirds of LGBTQ+ people said they avoid holding hands with a same-sex partner for fear of a negative reaction from others. If a significant portion of LGBTQ+ are scared of showing their partner affection in public, it is likely that very few of them are willing to put themselves in the limelight to talk about equal rights. It's like putting a target on your back.

As an ally you can support others by being the first to raise awareness of LGBTQ+ issues. Challenge any inequality or discrimination you see, using your privilege to defend others and uplift them. Question why there is a lack of representation in the media and in positions of authority. Queer voices are often ignored or disregarded as a ‘vocal minority’; however, if our allies are able to get the spotlight on LGBTQ+ issues, the mic can be handed over to voices that need to be heard.

Educate yourself on a regular basis

Asking questions - respectfully, of course - is always a good thing. We stan anyone who is curious and seeks knowledge to better their understanding. Search engines and LGBTQ+ sites such as Pink News can really help you get under the skin of what is going on. Setting up Google Alerts is another great way to keep up-to-date on topics that affect our community.

However, please don’t assume that all LGBTQ+ people are your own personal queer Google (Quoogle?). It can be emotionally taxing and physically draining to repeatedly explain our existence. It is also worth noting that queer folks don’t owe you their ‘story’ either. Individuals could have experiences they are uncomfortable sharing or they could simply not want to talk about it. This should be respected; after all, how many times have you been asked “when did you know that you were straight”?

If you are looking to develop your own knowledge there are lots of free resources out there that you can tap into. Stonewall has some amazing toolkits for the workplace and in schools and colleges that you can share.

The internet is full of free learning spaces; Eventbrite has free webinars where you can learn directly from charities or LGBTQ+ individuals, for example. You could also diversify your social media feeds by following LGBTQ+ content creators. I personally advocate following Mermaids and the LGBT Foundation for some quick, insightful content.

If you are looking for a more interactive experience I also highly recommend getting involved with Google’s IamRemarkable initiative or visiting the British Museum’s LGBTQ+ histories trail.

Don’t assume that someone is ‘out’

One of my biggest culture shocks after realising that I was bisexual was the idea of ‘coming out’. Culturally, we assume that we have this grand moment of announcing to the world our identity and we are done. This is very much not the case.

As we live in a heteronormative world (a society that treats cisgender, straight people as 'the norm' and so society is based around their needs), I find myself undertaking a risk assessment every time I mention my personal life. This can range from discussing my wife in client meetings to taxi drivers striking up a conversation about my ‘husband and kids’. ‘Outing’ myself daily puts me at financial and potentially physical risk. Although I will always put my safety first, I prefer to use the word ‘wife’ over ‘partner’ as I do not want to deny her existence. I choose my wording depending on the situation.

National charity Stonewall found that almost half of all LGBTQ+ people were not yet open to everyone in their family about their sexuality or gender identity. In the workplace, 35% of LGBTQ+ staff have hidden their sexual orientation for fear of discrimination. Like with any personal information, a good ally should be mindful about what they are sharing without permission. Some people are very open about their personal lives, while others choose not to disclose it in a work environment. A good rule of thumb; if you don’t have explicit permission to share someone’s sexual orientation, then don’t. Obviously, this is not a full list of all the steps you can take on your journey to becoming a good ally, but it should help you get started in ways you may not have considered. If you really want to support someone you care about, the simplest way to do it is to strike up a conversation and ask how they might want to be supported. Centre their lived experience and needs, and you’re already on your way. Remember that allyship doesn’t end when Pride Month does. We need allies 24/7, all year round to drive meaningful, lasting change.